Hi all! I’m here with my first Top 5 Wednesday. I know that this week’s top 5 is supposed to be Top 5 Hunger Games Moments (movies or books) but I have never read The Hunger Games and have only seen the first movie once – I know I know. So I decided that I would do a past Top 5 Wednesday topic and this once seemed perfect for me.

Before we get onto the books I would like to mention that Top 5 Wednesday was created over on BookTube by the wonderful Laniey at gingerreadslaniey. Also you can check out the Goodreads page for past and future topics.  Now onto my Top 5 Historical Novels which is actually a Top 6 Wednesday. The books are listed in no particular order.

This was the first book I read this year and is definitely a favourite. Sunne in Splendour is a massive book – over 900 pages – but it never drags or feels too long. This story is set during arguably England’s most bloody period, during a civil war known as The Wars of the Roses. But this novel focuses on Richard III, starting with him as a child during the early stages of the war. I love the way Penman has brought Richard to life and shows us what he might just have been like rather than the caricature Shakespeare portrays in his play.

I would highly recommend to anyone who loves the medieval history, historical fiction in general and political dramas. 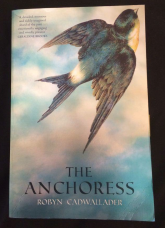 The Anchoress is a debut novel and is beautifully written. This story is set during the early English medieval period in 1255. It’s about a girl named Sarah who at seventeen decides to become an anchoress to escape the loss of her dead sister and the pressure to marry. An anchoress is a holy women who chooses to be shut way from the world, kept in a cell 7 by 9 paces, and spends her life praying. I thought by having this book centred around this tiny cell it would drag or be dull … But I was wrong. I adore this book. And even though Sarah is shut away from the village you aren’t separated from the drama as part of Sarah’s role is to guide the women of the village and pray from them.

Also this book is told from two perspectives; the anchoress, Sarah and her newly appointed confessor, Father Ranaulf. The Anchoress deals heavily with questions of faith and gives a fascinating into insight into medieval religious practices.

I would highly recommend this to anyone who loves historical fiction, medieval fiction but also anyone interest in theology.

I studied this book for my Year 12 English class and loved it. Year of Wonders is set during the epidemic of The Black Plague, 1666. The illness is carried by infected cloth with a London tailor who is boarding at our narrator, Anna’s house. Once the villagers recognise just what this illness is they decide to go into quarantine to prevent the disease from spreading further. Inspired by the true story of Eyam, a village in the rugged hill country of England, this is a well researched and beautifully vivid novel. Brooks deals with the independence of women and town dynamics. Year of Wonders also looks at faith and how people react when their faith is tested.

Would recommend to anyone who enjoys reading strong female characters, historical fiction or who interested in the event of The Black Plague.

Now this is a series. The first three books are already out – Stormbird, Trinity and Bloodline – with the last book being released lated 2016. Each novel focuses on a particular section of, what was known at the time as, The Cousin Wars. Strombird follows The Lancastrians and their French Queen, Margaret of Anjou and how Henry XI’s illness causes England to lose their lands in France. This loss and Margaret’s ruling causing growing discontent in the English nobility, particularly from the king’s cousin, Richard of York. Trinity follows the events in Stormbird but follows the Yorkist Lords: Richard of York, Earl of Sailsbury and Earl of Warwick. The third book, Bloodline, follows the young Edward of March now Edward of York and the battle of Towton.

This series has been heavily researched and is beautifully written. Some historical novels having been so meticulously researched that they no longer read like novels but textbooks. But not in this cause, Iggulden has brought these characters to life and they really leap off the page. I would recommend for fans of the time period, historical and medieval fiction, and political dramas.

The Maid tells the story of The Saint, Joan of Arc. I adored the book and read it in one or two sittings. Cutter explores Joan’s short life and tells the story of Jeanne, the young girl from Orléans. The girl whose sister was murdered by the English, who wanted to escape from a violent father and a forced married, the girl who taught herself to ride and fight, and the girl who had the courage to inspired thousands to follow her and take arms against the English. I will admit I didn’t know much about Joan of Arc before I read this book, apart from a brief explanation in a Year 8 history class. Cutter does an amazing job of showing us behind the mystery and showing us the human behind the heroine and saint. I thought Cutter handled the voices Joan hears beautifully, in a way that you’re never sure if they a real or a mere hallucination.

I would recommend to anyone interested is strong women, historical and medieval fiction.

This one is a little different from the others on the list, in that it set in a more recent time period. Z tells the story of Zelda Fitzgerald, wife to the famous F. Scott Fitzgerald. Zelda was an artist in her own right. Fowler gives an insight into the lifestyle of artists and creative people in New York and Paris during the 20s and 30s. As a writer I found the insight she gave into the publishing industry at the time was fascinating. Fowler shines light on this famous couple’s relationship and the struggles they dealt with pursing creative careers. But also shows her readers who Zelda Fitzgerald is beyond being The First Flapper. Zelda is an interesting character who, in her own right, was successful. This novel is beautiful written and well researched.

Would recommend for fans of F. Scott Fitzgerald or Zelda Fitzgerald, historical fiction, the roaring 20s or The Jazz Age.

That’s all from me for today,