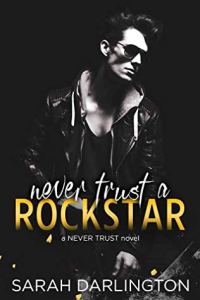 “He caught my wrist. ‘I don’t care what the dictionary says Emma, trust me, that wasn’t a kiss.’ His eyes are adamant. ‘You’ll know when I kiss you. I promise.’”

I will start by saying that I was given an ARC copy in exchange for an honest review. These opinions are my own. Thank you so much to Sarah for sending a copy my way!

WIN A DATE WITH A HOT ROCKSTAR?
Yes, please. Sign me up.

Emma has always been obsessed with Ollie Mills of the southern rock band, Sunset Revival. She follows his every move on Twitter, likes all his posts on Instagram, and stalks his page on Facebook. So when there’s a contest to win a date with the sexy-as-sin, bad-boy rockstar, of course she enters.

It’s a one in a million chance.

Caleb Mills has always been unlucky in love. From the girl who broke his heart, to every one-night stand in between, the lead singer of Sunset Revival barely feels anything anymore. He’s focused on his music and nothing more. Until he sees Emma, in a blue dress, on a hot night in Nashville. She’s meant to be his brother’s date, but the moment his eyes connect with hers he wants this beautiful girl all for himself.

Caleb knows, it will only take Ollie a minute to screw things up. And he’ll be there waiting to win this girl’s heart the moment he does. But can any girl, ever, really trust a rockstar?

Never Trust a Rockstar is the first book in a new series, which follows the rock band, Sunset Revival. The band consists of three brothers, Luke, Caleb and Ollie, and their cousin Dani. This was a quick and sweet read. I enjoyed every minute. Honestly, I couldn’t put this one down.

Emma is a complete fangirl for the band’s heartthrob, Ollie. She spends hours scrolling through all of his social media pages. It’s a break from the responsibilities of her life — work, taking care of her terminally ill mother and avoiding her boyfriend. After Emma’s aunt signs her up for the competition, she soon learns that sometimes it’s best not to meet your idols, the real Ollie doesn’t match up to her fantasy. But she does meet a sweet guy who’s attentive and make sure she’s okay and that’s the lead singer, Caleb.

Caleb has the whole sweet shy guy thing going on. Even though he’s the band’s lead singer, he is unsure of his talent and is insecure, which is refreshing for the rock start types we are used to. He had me totally charmed and I was rooting from him the whole time.

She’s the small-town girl who’s struggling with the weight of her family obligations and he is honestly the sweetest rockstar you will ever meet. The chemistry between the two is there from the star but Caleb doesn’t act upon it straight away because first off, his brother upset her and then he finds out that she had a boyfriend. Instead, he’s happy to be her friend and even offers dating advice, which just about kills him. I was thrilled when Emma left her boyfriend. It seemed like the pair has a perfect night together before Caleb’s past catches up with them. So if you love a slow burn, this is the perfect read for you.

The story is told in alternating first narratives from both Emma and Caleb. I will say that I did prefer Caleb’s point of view but that’s mostly because I wasn’t huge of Emma at the start. She does come across a touch naïve and almost refused to follow her heart in fear that she upsets her mum. But she does have some tough decisions to make in terms of her own health, which she handles a thousand times better than I would.

The only downside is that it does feel a touch rush at times and it felt like it ended abruptly. I wish it was longer but maybe that’s just me being selfish because I wanted more from this story.

Sarah Darlington has set up the series nicely. We have been introduced to the Mills family and their interesting family dynamic. I’m excited to dive into the next book. Highly recommend if you are a fan of romances that slow burn, set in a small town and include rockstars.

One thought on “Never a Trust a Rockstar”