I’m here with the second instalment of my recent reads series. I’ve read some fantastic books, all rated between 4 to 5 stars.

I do have a full review of this coming so keep an eye out of that. I have loved all of Joanna Courtney’s previous books and Fire Queen is no exception. She has the way to writing about Europe in the dark ages where she is able to balance the history and ability to reconstruct the culture and lives of historical figures with a compelling plot and complex character development. She is one of my auto-buy authors.

This is the second instalment of Joanna Courtney’s Shakespeare’s Queens series. Fire Queen unearths the history and reality of Ophelia and Denmark’s doomed Prince Hamlet. Ofelia watched her mother throw herself on her husband’s funeral pyre. She hardens her heart, vowing that she will never belong to a man. She throws herself into training and become one of Denmark’s valued warrior and Hamlet’s constable.

I found Ofelia to be a refreshing character, she has shunned her femininity and dedicated to her life to become a warrior. Often when you see powerful women in historical fiction they have gained their power through their sons or husbands, but not in Ofelia’s case. She’s unyielding in her opinions and doesn’t conform to societal roles.

Hamlet is hopeless in love with Ofelia. He will do anything for her but it’s doomed from the start. Ofelia is stubborn and will not budge from her vows. When she rejects his hand in marriage, Hamlet elects her as his constable, the king’s most trusted advisor. My heart broke when Hamlet reached the point where he couldn’t keep pining after her, but time and time again, Hamlet is drawn back to Ofelia.

The next instalment, Iron Queen, is about Cordelia, daughter of King Lear. I’m excited to get to it. We have another year until it’s released so maybe this time I’ll read the play beforehand.

This was my first read from S. Young and I adored it. I have found a new favourite paranormal series! War of Hearts follows Thea Quinn who’s been on the run for 7 years from an absolute psychopath, Jasper Ashforth, who wants to harness her powerful abilities. To hunt Thea down, Ashforth hires Conall MacLennan, Alpha and Chief of Clan MacLennan who are the last werewolf pack in Scotland. If Conall succeeds, he will get a cure for his sister’s lycanthropic disease. Thea tries he best to evade Conall which leads to a race across Europe.

Part of the mystery of this book is that we don’t know what Thea is. She super fast and strong, she can manipulate minds and has the ability to heal from pretty much everything.  She is one of the strongest characters I’ve read, and not just because of her abilities. Twice she’s had to watch her family die. So now she keeps her distance and is ready to pick up and leave town at short notice. I was thrilled when she finally found a home with Conall.

Conall is the perfect grumpy hero. He will give up everything for his pack and family and he never goes back on his word. Ashford has painted Thea as a thief, a manipulator and a murder. It’s something Conall struggles to remind himself of this once he tracks Thea. She not the villain he expects her to be and their intense connection and passion distracts him from his task. Because if he doesn’t hand Thea over, his sister will die.

We all know by know that the fated mates tropes is my all time favourite. I adored watching the relationship unfold between them from kidnapper and kidnapped to putting difference aside to survive to finally being mates. This is a slow burn, the first steamy scene is over half way into the book. Prefect for fans of the enemies to lovers trope.

The world is lush as had everything I want from a paranormal world. I loved the mythology Young used for how the vampires and werewolves were created. Alongs to the wolves and vampires we also have  witches, it will be interesting to see if anymore magical beings are added to the world. I loved the setting. It was fantastic to have a paranormal books set across Europe considering a majority of the ones I’ve read are set in America.

I cannot wait for the sequel Kiss of Vengeance. We have be introduced to Fionn and Rose so I cannot wait to see how their romance plays out. 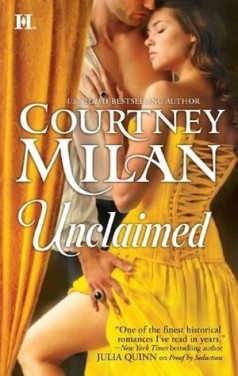 This was my first ever Courtney Milan. I picked it up on the recommendation of Esme from Feminist Romance. I really enjoyed this. In this story we follow author, Sir Mark Turner who is London’s most sought-after bachelor and he’s know for his virtuous reputation. But beneath that reputation is a passionate nature he’s careful to keep in place until he meets the beautiful Jessica Farleigh, the woman he’s waited his whole life for. However, Jessica isn’t the genteel lady Sir Mark believes her to be. She’s a courtesan desperate to win her freedom. She seizes her chance when Sir Mark’s enemies make her an offer she can’t refuse — seduce Mark, tarnish his good name and a princely sum will be hers.

We have a virgin hero! About time we see more of these because I love when a popular trope is reversed. Sir Mark is a famous author, think Beatlemania levels of fame. The content of his book revolves around a partial guide to chastity. Don’t worry about the whole religious, I-am-holier-than-you, pretentious reasoning for his chastity are very clear and quite noble and considerate. I loved this, it was so refreshing and honestly make me swoon even more for Sir Mark.

Jessica is a courtesan, a fallen woman who’s life was turned upside down after a young love affair sees her reputation ruined. She’s reached the point of desperation and will do whatever she can to survive. She has not desire to find herself back on the street or hustling to be some noble lord’s mistress. Instead she takes up the offer of a power-hungry politician to seduce London’s virginal sweetheart. If she succeeds, Jessica will be a free woman and will never have to sell her body again.

In terms of the historical side of things, I’m not sure how historical accurate the setting is. Mostly because I don’t know all that much about the Victorian Ear. But I felt that Milan definitely nailed the social rules, constrictions and the class system. Overall, I really enjoyed this and I’m excited to dive into more of Milan’s work.

Never Trust a Rockstar is the first book in a new series, which follows the rock band, Sunset Revival. This was a quick and sweet read. I enjoyed every minute. Honestly, I couldn’t put this one down.

Emma is a complete fangirl for the band’s heartthrob, Ollie. After Emma’s aunt signs her up for the competition, she soon learns that sometimes it’s best not to meet your idols but she does meet a sweet guy who’s attentive and make sure she’s okay and that’s the lead singer, Caleb.

She’s the small-town girl who’s struggling with the weight of her family obligations and he is honestly the sweetest rockstar you will ever meet. The chemistry between the two is there from the star but Caleb doesn’t act upon it straight away instead, he’s happy to be her friend.⁠ Highly recommend if you are a fan of romances that slow burn, set in a small town and include rockstars.⁠

This book has just the right amount of angst and steaminess. I’m becoming addicted to this series. I cannot put these books down.

Dani Mills doesn’t date and she doesn’t do love. She’s been there, done that and got her heart broken. However, from the moment she sees John she knew she wanted him but she doesn’t except one night to turn into more.⁠

There is a fair bit of angst in this relationship. Both of them are scared of letting people in they just used different methods of keeping their distance. But as they get closer, they bring out the best in each other, which is so vital in a relationship.

I love that Sarah Darlington has subverted the virgin and player trope; Dani is the player who has left behind a string of one-night stands where John has been celibate for years. It was refreshing. I’d loved to see more of this in the romance world.

These are that books I’ve read recently. Comment down below and let me know if you’ve read any of these. Also what have you been reading recently?